Sleeve gastrectomy procedure is a relatively new type of bariatric surgery, consisting of cutting out about 2/3 of the stomach and reducing its capacity to about 25% of the initial capacity. Removal of its large part is performed around the greater curvature. After performing the surgical procedure the stomach is shaped tube- or sleeve-like. The procedure is most often performed laparoscopically. The capacity of the portion of the stomach left after the surgery amount to about 150 ml, hence the patient after sleeve gastrectomy procedure is not able to take in large volumes of food at once, owing to which weightloss occurs. The procedure reduces the volume of the stomach permanently and is an irreversible process.

Smaller post-operation wounds are an advantage of performing this procedure laparoscopically, hence less pain, faster healing of the wounds, faster regaining of full physical activity and quicker return to everyday activities, owing to the very short hispitalisation period. Nowadays sleeve gastrectomy is considered one of the basic bariatric procedures. 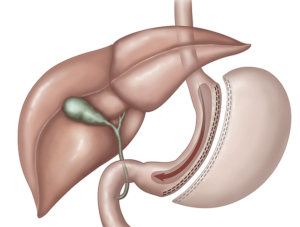 The sleeve gastrectomy surgery is performed under general anaesthesia and lasts about 1,5 hours. The hospitalisation after the procedure usually lasts several days (approximately 4 days).

The patient after the surgery should start moving on the same day. During the first 24 hours after the surgery an upper digestive tract x-ray with contrast shading is performed. After the procedure the patient is obliged to keep the recommended diet. For the first two weeks the diet should be liquid and mixed. Solid foods can be introduced gradually.

It has been proven, that sleeve gastrectomy has positive influence retreating of diabetes, hypertension symptoms and on reduction of blood cholesterol concentration.